Our new offices can reduce stress

We have plants! and not just because they look so pretty, studies show there are proven health benefits to a greener office.

Reduce stress
Just the colour green is said to have a calming effect and helps alleviate anxiety, depression and nervousness. So imagine what green plants can do!
Various studies have claimed that by introducing plants in to an office environment , workers exhibited less anxiety and stress levels were reduced. Apparently we will all have more energy as fatigue is reduced by 38%!

Increased productivity
Research for The University of Exeter show a 15% increase in productivity after plants were introduced into an office area.

Reduces sickness and sick days
A plant filled office could reduce workers absence by a fifth, according to a study by Wageningen Environmental Research. Workers show higher rates of well-being and productivity in green office space.

Clean the air
It is well-known that plants are able to absorb nasty gases such as carbon dioxide but scientist have since discovered that plants are also able to absorb other Volatile Organic Compounds (VOCs for short) such as benzene found in plastics, pesticides and cigarette smoke.
VOCs have also been linked to conditions such as asthma as well as chronic diseases such as cancer.

Reduce noise levels
Plants absorb noise – is there anything these beauties can’t do! 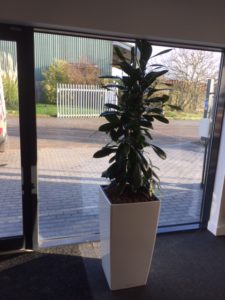